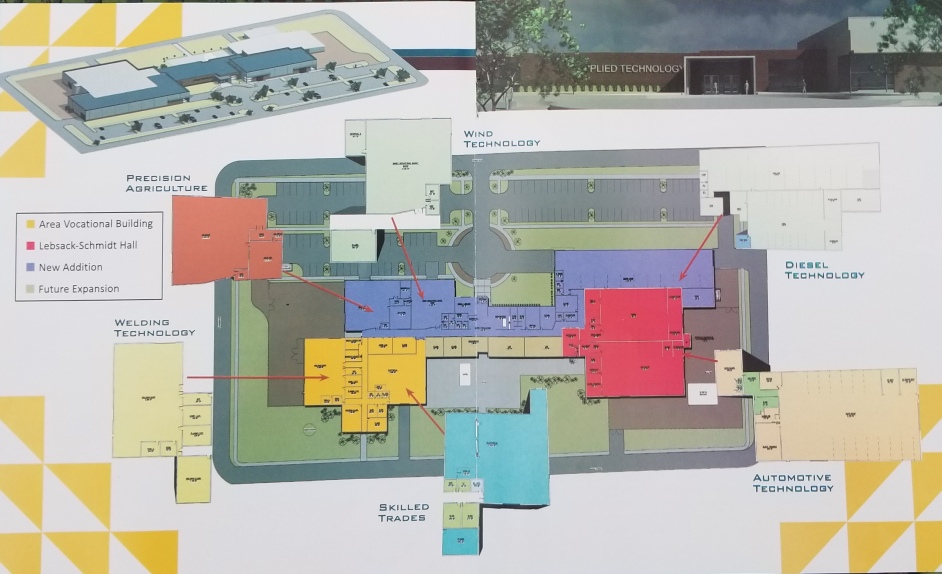 Northeastern Junior College is feeling the love from the Colorado legislature. The Capital Development Committee, which is responsible for reviewing funding requests for capital projects from all state agencies and making prioritized recommendations for the Joint Budget Committee, has recommended NJC’s applied technology campus expansion and remodel as one of the top higher education projects on the list for FY 2022-23.

NJC’s project falls at number 13 on the committee’s list of recommended projects.

The recommendation is especially exciting given that this was the first year the college requested funding for the project and typically it takes several years for requests to be granted. When NJC decided to remodel the E.S. French building it took ten years of asking before they finally got a yes from the CDC and JBC.

Helping shepherd the project through the CDC was Senator Jerry Sonnenberg, who serves on the committee. He is very confident the project will make it through the entire process and get approval from the JBC, noting that his committee anticipates the JBC will fund at least the first $300 million worth of projects. NJC is seeking $12,575,000 for its project.

“This will be a huge asset to both NJC and our community,” Sonnenberg said.

The project will expand and renovate the existing buildings on the applied technology campus to allow for the expansion of the automotive technology, diesel technology and wind technology programs; move the precision agriculture and welding technology programs; and allow for the addition of new programs such as skilled trades and solar technology. It will connect a new 37,500 gross square-foot pre-engineered metal building to the existing Lebsach-Schmidt Building and renovate 45,470 gross square feet of existing building space and make improvements to the plumbing, HVAC, electrical and fire protection systems.

The CDC recommendation is a nice welcoming present for NJC President Mike White, who just started his new position 14 days ago and is excited about the project.

“I think that would put a new face on our applied technology center which is really an exciting development for NJC,” he told the NJC Advisory Council Thursday.

NJC kicked off a capital campaign for the ATC expansion and remodel in the fall of 2019 and at that time staff and faculty had already pledged or donated more than $26,000, but the project went on a bit of a hiatus when the COVID-19 pandemic hit.

In addition to the CDC recommendation, the advisory council heard about some other funding that NJC is already guaranteed to get from the state thanks to two pieces of legislation that were passed last year.

The first, HB21-1149 known as Strengthening Photovoltaic and Renewable Careers (SPARC), is strictly for renewable energy and electrical mechanical generation maintenance. Through this bill, NJC will receive about $1,065,000 over a five-year period, with about $350,000 coming the first year.

According to Linda Merkl, vice president of academic affairs, the college plans to use some of the money to purchase hybrid vehicles for students in the auto diesel program to train and practice on. Funding will also be used to help NJC develop and refine pathways for different types of students – Department of Corrections, workforce, ESL and potentially military students, and to develop higher-end skill certificates for wind energy and welding students.

“On the high end, we’re kind of bringing some different programs together and allowing all of them to expand their skills,” Merkl said.

Part of this project will also happen simultaneously with another project NJC is involved in through the Colorado Community College System, the Education Design Lab. While most colleges in the system are working on pathways for health careers, because NJC has funding from SPARC, “we said we really need to be focusing these efforts in what we’re doing with that,” Merkl said, but was quick to point out that doesn’t mean there won’t be future opportunities for health pathways later on.

NJC will also receive funding from HB21-1264, which is an allocation of state funding to support workforce development activities. Department heads who were interested and whose program was in high need were asked to apply, the nursing program did so and was awarded $26,291. Of that, $10,000 will be used to train the nursing faculty on the next generation NCLEX, which is the exam that all nurses have to take.

“We want to get all of our faculty up to speed with that,” Merkl said.

The cost for that came in a little bit under what was expected, so NJC is hoping to get some additional professional development for the nursing staff out of the state funds as well.

“We’re taking a chunk of the overall ATC build that we want to do and focusing on welding and what we want to do is get the new transformer put in and do the electrical and creation of the welding base,” Merkl said.

Later in the meeting, President White spoke about a bill that is currently working its way through the legislature, SB 22-003, which would allow community colleges to offer a bachelor of science degree in nursing to students who have or are pursuing a practical nursing certificate in nursing. The bill has made it through the Senate and is now in the House, and while White wasn’t sure how long it will take to get the bill passed, he said it does look very promising.

“This would allow our current students and previous graduates to do a virtual course, one more year of training while they work and earn their bachelor of science in nursing,” White said. “I’m excited to see this bill pass; we’ve got wade forward pretty quickly while we evaluate our capacity and demand to see if it’s something we should offer locally.”