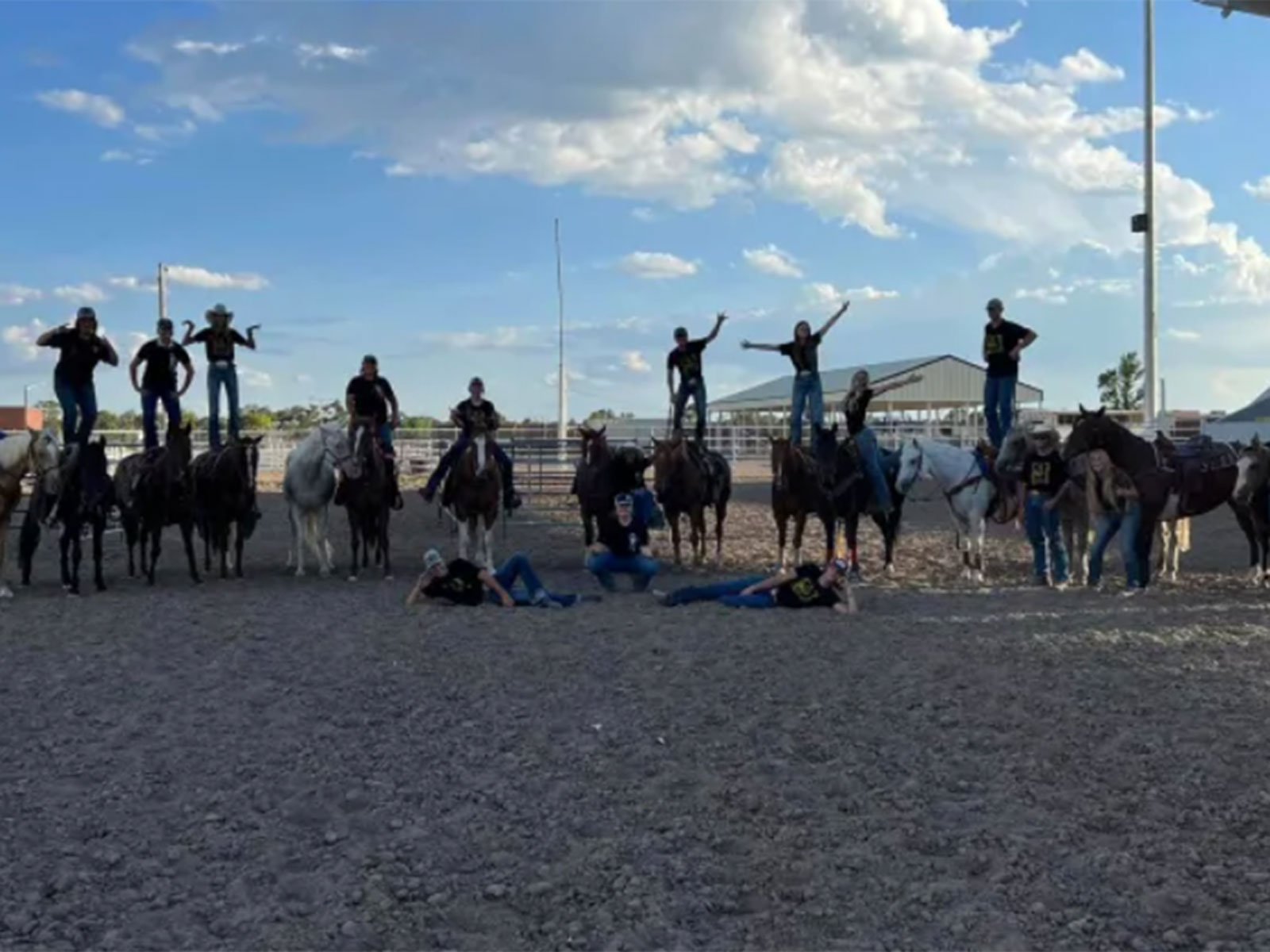 Students at Northeastern Junior College are learning some valuable life skills with the help of horses.

The ranch horse versatility team was started in 2006 by Wayne Miller, who wanted to have a competitive outlet for students who were involved with horses but were not a part of the college’s rodeo team. Over the years it has grown to be quite successful and is now headed by instructor Amanda Morgan with help from Cole Briggs, equine management program coordinator and instructor.

When Briggs came to NJC, Miller had moved on to Laramie Community College in Cheyenne, Wyoming, and they along with another friend of Briggs’, who was teaching at Colorado State University, got together and started working on developing a competitive outlet for students called ranch horse versatility “and it started getting big across the country,” Briggs said at a recent NJC Advisory Council meeting.

Ranch horse versatility includes four different events that all team members compete in at each show. In the first event, the ranch trail, the horse and rider must complete several mandatory obstacles such as going over a bridge, opening a gate or crossing a water obstacle. One competition even included an outhouse, which riders had to lead their horse to, ground tie the horse, pretend to use the outhouse and then come out and get back on the horse — if it was still there.

The second event is ranch riding, which is a “real precise event” that focuses on horsemanship display, with riders having to make different transitions from trot to lope, lope to gallop, gallop back to trot and trot back to walk. During this event, the judge looks at how pleasurable the horse looks to ride, how quiet the rider and horse are and if the horse is responding well.

Next is reining, which is a notch up from ranch riding and is more intense, it has the horse and rider do sliding stops, fast spins and figure-eight patterns.

The last event is cow working, which is what kind of hooks students. It is offered at beginner, intermediate and advanced levels in collegiate competitions, “because the cow work takes a pretty dang skilled horse and a pretty dang skilled student, and sometimes we don’t have both of them ready together at the same time,” Briggs said. The different levels mean students who have never shown before, and in one case had never ridden until a month before school started, don’t have to compete with those who may have 10 years of competition experience.

“What makes (ranch horse versatility) so unique I think is that what makes an exceptional reining cow horse often gives (the students) some challenges in the trail and pleasure and vice versa: a really great trail and pleasure horse is a challenge in the rein and cow horse where you step up the speed and such, so it really attracts these students who want a challenge, who want to work hard,” Morgan said. “It really makes a versatile horse, but really makes a versatile student and it’s fun to watch how much maturity they get through this contest. It seems like it’s just horses and cowboy hats, but really it’s so cool.”

Briggs also pointed out that it’s nice because with this kind of competition if a team member does poorly in one event they know they have three more chances to re-gather themselves and try to do better.

“That’s why it got so popular. A lot of people like it; they like a versatile horse than can do multiple things and they like a challenge,” Briggs said.

Former NJC athletes have seen great success; some have gone on to compete at four-year universities like West Texas A&M and others are working as trainers. One even helps Mustang Maddy, a famous mustang trainer, manage her online presence and another, Jeb Stoltzfus, is a trainer in Alamosa and last year was 13th in the World’s Greatest Horseman, one of the biggest events in the country.

“We have three at West Texas University now competing in that upper division. We got to be a big part of that growth and the coach is now calling me and saying ‘who do you have for me next year?’ So I think we’re doing a good job of preparing them for that,” Morgan said.

All of the team members keep their horses on campus in one of the 60 stalls that NJC has as part of its stalling facility across from the Logan County Fairgrounds.

“When I first came, the students’ horses were boarded all over town, they kept their horses at different places, they all had the trailer here and it was a real pain for them and expense for them and it was a little dangerous having those guys back and forth all of the time, so the stalling facility has been really great for us,” Briggs said.

He noted one of the nice things about ranch horse versatility is in most competitions if you’re a non-professional or an amateur you have to show your own horse, but in collegiate ranch horse contests the competitors can show other people’s horses.

“Most of the students that come to our ranch horse team and want to show horses competitively don’t have a horse that’s probably going to be real competitive, but (Amanda) and I try to do a really a good job of trying to find them horses that they can be competitive on,” Briggs said, adding that some of the horses are horses that were started in NJC’s colt training program.

“It’s nice; it gives our students a chance to get affiliated with some of those organizations if they’ve not ever done that before, not been involved in that before. They’re starting to learn a little bit about what association is, what it does, the leadership in it, the management of it and all of those sorts of things,” Briggs said.

The team’s season spans both fall and spring. In the fall they show at CSU Silver Jubilee, CoWN Region 8 Championship in Loveland, and Latigo Trails, and in the spring they compete at National Reined Cow Horse Association World Championship Show in Fort Worth; LCCC; CSU; Nebraska College of Technical Agriculture’s Punchy in Pink, a breast cancer awareness show; and the Collegiate National Championship.

NJC also hosts its own show in the fall. They did have a second one in spring but it went away and now they’re in the process of trying to bring it back. This fall’s NJC show will take place Oct. 30-Nov. 1 at the Double Check Arena, in Eaton. The show is not held in Sterling because there aren’t enough horse stalls.

Funding from that show is how the team operates; last year they made $27,000 after expenses. The show is an AQHA and NIRSHA-approved event. Morgan said what makes it unique is along with the college students, cowboys and cowgirls who are showing at World’s Greatest Horseman, which she called equivalent to their sport’s Super Bowl, are also showing with the students.

“They are sitting alongside having conversations with them, telling them what they can be doing better in the arena,” Morgan said. “Then we go back to some of these other shows and it’s just this really neat opportunity for them to really see where this can lead for them and get direct input and network and learn to talk to some of these people.”

As part of the program, Morgan has also formed an Equine Club Senate that meets every week and includes a president, vice president, treasurer, secretary and Campus Activities Board representative.

They discuss fundraising ideas and teambuilding activities, keep track of entries for upcoming shows, discuss travel logistics for those shows and discuss any campus student activities they are involved in. For instance, the team has helped out at NJC’s Culture Fair, the Community Club Fair at the beginning of the school year and Trick or Treat Street and they also let some international students that might not have access or exposure to horses come out and get on one of the horses a few times during the year.

“Depending on which group I have in the senate role, it is amazing how they can make our freshmen feel welcome and a part of things here… That’s one of the things they have really prioritized and done an incredible job of too and so I think it really can help with our retention, and holding on to these students and making them feel like home away from home,” Morgan said.

The team is also involved in the community. Morgan works with youth in Akron and Holyoke on their ranch horsing and she is involved in Logan County 4-H, hosting a youth ranch horse night every Monday with help from the NJC ranch horse team members.

“The ag department as a whole, we pride ourselves on teaching them professionalism and working hard and this is hard work. Usually, we’re (at shows) two or three days and if we get to bed before 11 and we get to sleep in until 5 a.m. it’s a pretty good weekend,” Morgan said. “Some of the students struggle at first, but by the time they’re sophomores or super sophomores, they’re like ‘let’s go.’ They learn how to get some grit, they learn how to hydrate and take advantage of their sleeping hours and stay focused during the day even when they’re tired and put on their professional faces and go to work, and I think that’s huge in life.”

For team member Brielyn Blevens, who is currently serving as Miss Rodeo Logan County, one of the coolest things about the sport is the community.

“When I came here I didn’t really have a lot of friends until I really started getting involved in the ranch horse team and that introduced me to so many people in the community and not just this community but community elsewhere like in Texas, I have friends in Texas now; I have friends up in Nebraska at NCTA, so it’s really a cool thing to get you out there and get you started making friends,” she said.