Shay Carroll returns to NJC to give roping clinic 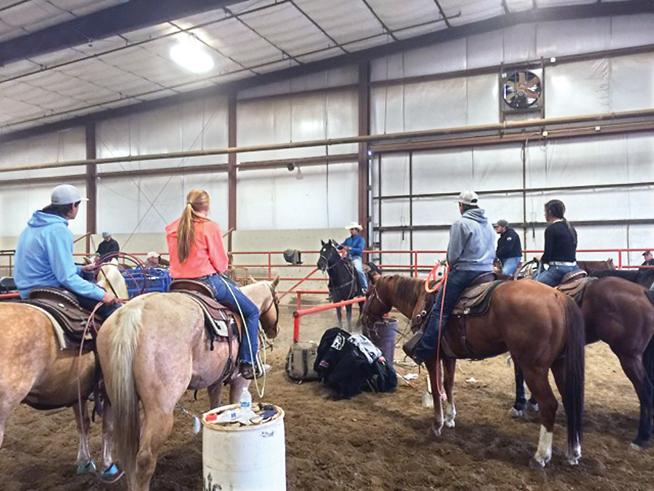 He was one of the most winning rodeo athletes in the history of Northeastern Junior College and last week Shay Carroll was back in Sterling to help members of the college’s current rodeo team when he held a free clinic on campus.

Carroll, originally from the LaJunta area, primarily makes his living now competing in the arena. While attending Northeastern, where he was a business major, he was named the National Intercollegiate Rodeo Association’s Rocky Mountain region’s back to back champion in the team roping and the men’s all-around title in both 2011 and 2012. In 2012, he went on to capture the National Champion Team Roping title and was named runner-up for the National All Around Cowboy title as well.

Carroll turned professional while he was at Northeastern. He ventured on to Tarelton State University in Stephenville, Texas, where in 2013, he qualified for the Mountain States Circuit Finals in the PRCA. His senior year at Tarelton, he qualified again for the College National Finals and graduated later that spring with a marketing degree.

In 2014, while competing around his college schedule, Carroll finished in the Professional Rodeo Cowboys Association ( PRCA) top 15 heelers, earning his way to the Wrangler National Finals Rodeo. At age 23, he was the youngest team roper to appear in Las Vegas that year.

Hailing from a tiny town in southeastern Colorado where he graduated in a class of 13, Carroll is a third-generation roper, and competes on a former tie-down roping horse named Sportscenter that he trained himself.

Today, Carroll, who still resides in Stephenville, has a Facebook page with well over 11,000 followers and he has some big name sponsorships including Cinch, Classic Ropes and Heel O’Matic, Martin Saddlery and Speedroping.com He recently appeared in a “Load Up” television commercial for Cinch which primarily airs on RFD TV.

Carroll also is doing a variety of workshops and clinics across the country when he isn’t actually competing. He continues to feel very connected to Northeastern and spent two days in Sterling in early November to meet with current rodeo team members. During this time he did a great deal of coaching students on horseback about their roping techniques, helping them know how to tweak themselves and their horses for better results. In addition to the hands-on help in the arena, he met with students during a dinner where he spoke to the group about what it takes to be a champion and got to break down the days practice runs frame by frame on his custom video equipment.

Carroll also spent time on campus meeting with college President Jay Lee. Shay carries with him a message of how important education is regardless how much money you’re able to win. His marketing degree has served him well in negotiating contracts with sponsors and building a business around his passion. Shay left Sterling headed to Utah for a roping school in Spanish Forks and will be headed back to Greeley for another roping school at Rappell’s arena Nov. 22-23.