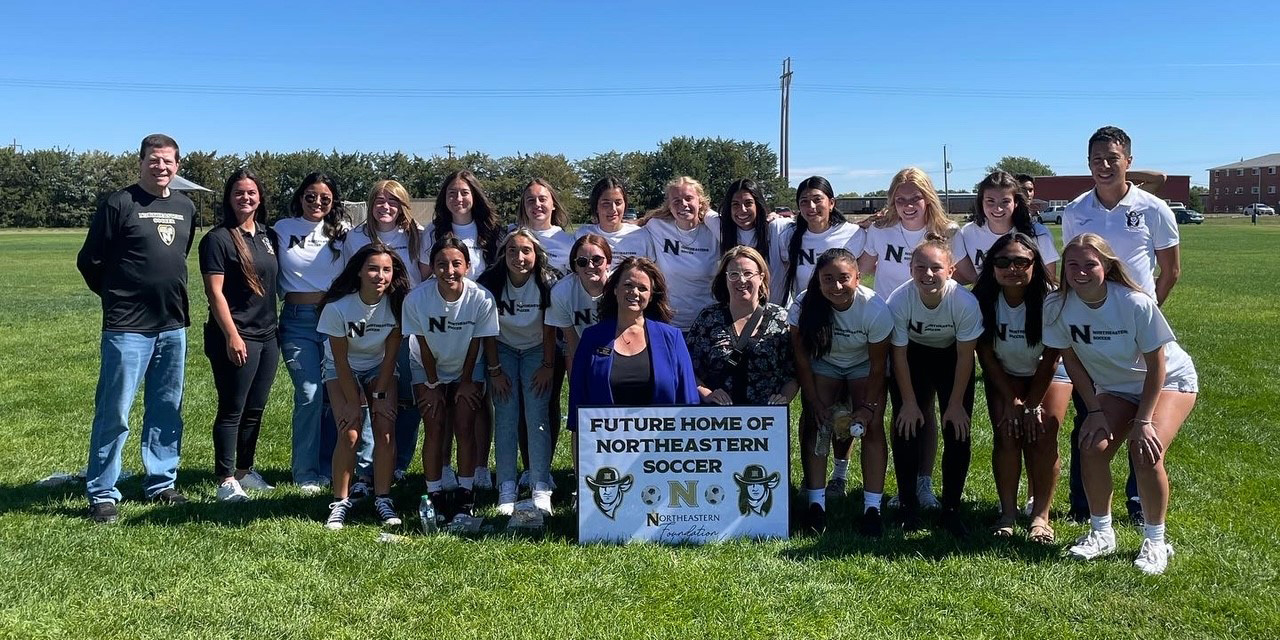 After several years without a place to call home Northeastern Junior College’s men’s and women’s soccer teams were all smiles Saturday at a groundbreaking ceremony for their new soccer field.

Located just across the way from the Plainsmen baseball field the new soccer field is part of the developments for the new Plainsmen Park, at Pioneer Road and Highway 138. The field will be used by the college teams, as well as the Sterling High School boys and girls soccer teams, who were also in attendance Saturday.

“Us having a safe place for our students, our kids to play is such an important thing for us and we couldn’t have done this without the support of our generous donors, one of whom is with us today, Ms. Judy Kimball,” said Vivian Hadley, executive director of the NJC Foundation.

She also thanked Marci Henry, athletic director at NJC, for coming in front of the NJC Foundation board and bringing the challenges that the soccer teams were facing to their attention.

“I’ve known about this for a long time, but we really made it a focus and a forefront for us to work hard and gather enough funds to build a new soccer field and I’m so proud to have been a part of that,” Hadley said.

She went on to thank the soccer coaches for all they do, “as mentors to students, coaches are such a strong and important part of our students’ lives and it’s not just the gameplay on the field, but it’s what the coaches give to our students throughout their lives. So, thank you coaches for helping our students, helping our young people grow and become the leaders that they will become.”

Hadley also gave a special thank you to Susan Monahan and Mark Reck: “Without them we would not have been able to pull this together. They have been very generous to our community and to our college.”

NJC President Mike White thanked SHS for its partnership and for allowing NJC to share a field with them since the program’s inception.

“We look forward to sharing our field with you as we move forward and get it completed for the next season,” he said.

He also thanked the amazingly generous donors who recognized the importance of this sport and athletics in general and what it does for building teamwork.

Henry noted that NJC first started soccer 11 years ago and at that time there was no scholarship money or field, but they had a great partnership with SHS.

In 2016, the athletic department came together and wrote a strategic plan that talked about student-athlete personal development and wellbeing, academic excellence, facilities and marketing. The only thing still needing to be accomplished was the facilities, “so today is really special, knowing that we are so close to being able to have our first match out there,” Henry said.

Since then, behind the scenes, the soccer teams started raising some money and along with some department efforts they were able to raise about $50,000, which was matched by the NJC Foundation.

“This field not only provides a safe environment for our students, for Sterling High students to play, but it will also enhance the overall student experience as we’ll have bleachers, we’ll have places for the other students to come cheer them on and they’ll get that real campus community and the strong Sterling High community where you can have a lot of supporters,” Henry said.

Men’s soccer coach Chance Vang thanked everyone that made the new field possible and provided a new place that Northeastern players can proudly call their home. He related the field to Ikigai, a Japanese term that means “your reason for being; it is what brings you joy and inspiration to get out of bed every day and work hard.”

“This gives our coaching staff, supporters, alumni, current student-athletes and future generations of soccer players more Ikigai, the inspiration to wake up every day and be proud to have the opportunity to represent Northeastern on and off the pitch and in the real world,” Vang said.

He also thanked all alumni, former players and coaches, as well as current coaches and players, because all the combined past and present success, hard work and challenges have helped to build this field.

“As an alumni and former player here myself, it has been amazing to see the growth of this program since I arrived here in 2016,” Vang said.  “Pride, passion and blue-collar are what come to mind when I think about Northeastern soccer. We never had the best match pitch conditions, practice field, or the greatest soccer-specific facilities, but we always had a positive mindset and fought through adversity together. Year in and year out, each generation of teams always found a way to compete and be elite amongst the best teams in the country, regardless of our field conditions.”

He spoke about the history of his team. In 2015, they had a winless record, but the year after NJC hired Coach David Groves to take over and he turned around the program in 2016, with the team earning the most improved record of all levels of NCJAA men’s soccer after garnering nine wins. In 2017, the team had its deepest postseason run in program history, reaching the Region IX championship match and in 2018 the team earned its first national ranking as number 12 in the country, led by Coach Keith Buderus.

“Fast forward to now, we will have a brand new state-of-the-art field to call our home along with a nationally recognized program. Northeastern soccer has so much potential. Day by day, month by month and year by year, it has all been little baby steps to grow. With all the continuous support from the NJC Foundation, leaders of the college, the community and our players, I have no doubt that we will continue to be great,” Vang said.

Women’s soccer coach Ken McAlpine shared that having a field that the teams are proud to call home has been a goal and dream since the inception of the soccer programs, but for the longest time it was just that, a dream. It seemed they would get the ball rolling and get to a certain point, but it never quite happened until now.

“I’m sure you guys have all gone over there and seen the green grass, the sprinkler system on, it’s just a beautiful sight to know that the dream has finally become a reality,” McAlpine said.

He called the team a “tribe of traveling nomads,” pointing out that with no field they held practices wherever they could, in the previously weeded area where the field is now, the grassy area by the tennis courts at Prairie Park, at Pioneer Park, Sterling Middle School football field, Ayres Elementary and the outfield of the Sterling Baseball Organization field.

“We’ve been all over the place and so now to finally have a home just means absolutely so much,” McAlpine said.

He recalled his first game coaching at NJC; it was in Powell, Wyo., and the team was short one person with only 10 players. They did manage to win that game but the rest of the season didn’t go so well.

“To see us grow on the field and now to have a place that we can proudly call our home I can’t express my gratitude enough,” McAlpine said.

Men’s team captain Jared Maciel thanked all those that helped make the field that no one thought would be possible a reality.

“The soccer community here at Northeastern has always been the underdog, but with dedication and hard work from everyone we are here and we’ve managed no matter the facility we’ve had to climb our way to the top of the leader board,” Maciel said.

When he thinks of a student-athlete at Northeastern he thinks of adversity. “The NJC soccer teams can both relate, especially when we travel to other schools and see their great facilities, their dorms and their campus. We always joke, saying what if we have that field, that training pitch, that locker room? Although we don’t have the most ideal situation, I feel like the adversity of what we go through as Northeastern athletes helps us have a strong bond to pick one another up, no matter the situation,” Maciel said.

He noted even though he won’t be able to play on the field, it still means a lot for the future development of the program.

Women’s co-team captain Yanitza Garay congratulated the coaches, who will no longer be picking weeds off the field for hours, telling them the athletes appreciate how humble and dedicated they have been while dealing with the minor inconveniences of never having a home.

“Although I may never set foot on this field, it’s still something to be truly thankful for and look forward to. It is a luxury that you upcoming freshman will have that we did not, but we sure worked hard for it,” Garay said, adding that this new field symbolizes that “hard work pays off as long as you stay humble regardless of what you have and that good things come to those who wait.”

Her co-captain Allison Seery thanked all those who have supported the teams and worked on the field.

“This field is something we have all talked about, we all wanted a new home and now we can say we have one,” she said,  adding that now with a practice field and a guaranteed home field the program can only go up from here.

The soccer field is part of the Plainsmen Park Project. NJC is partnering with the City of Sterling, Logan County, Banner Health and Sterling Correctional Facility to pursue funding from Great Outdoors Colorado and other grantors to provide a new park for the community.  Along with the new soccer field, NJC is also planning the construction of a softball field in a part of the park.

To help them build something for everyone in the community, NJC has sent out a brief survey for the project that can be found at https://www.njc.edu/node/5600.