The Northeastern Junior College Alumni Association honored the Kokes family as the recipients of the 2019 Pride in Association award during the commencement exercise held on May 17, 2019. 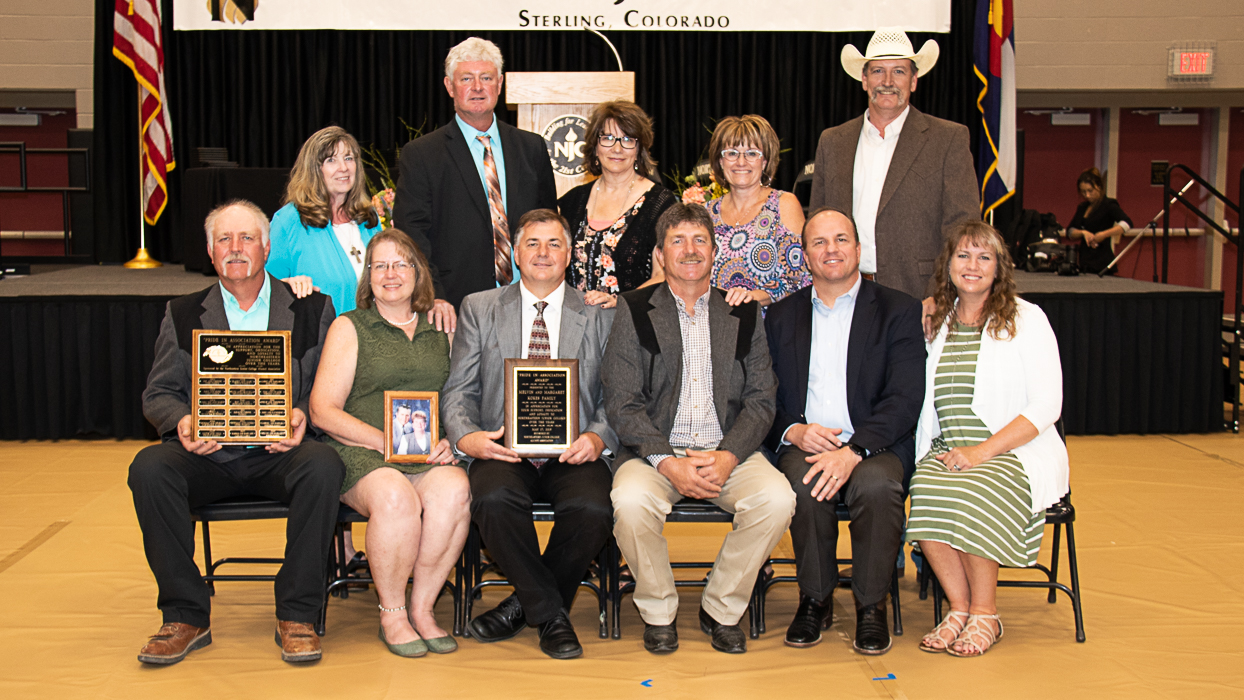 Melvin Kokes was born in 1935 and grew up the third of three children on a farm of meager means on the family homestead north of Crook, Colorado. Melvin worked long hard hours and like many young people of that generation, quit school in the eighth grade to help on the farm. Always a learner and entrepreneur Melvin continued to educate himself in many ways. He was always looking for a way to supplement his farm income just to make ends meet.

Margaret Tyson born in 1938 grew up in a large family of six sisters and two brothers in Yuma and Stoneham, Colorado. She was always “Daddy’s helper and at a young age would be out doing the ranch chores alongside her father”. Margaret graduated from Stoneham High School in 1956 and moved to Sterling to begin her new life.

Melvin and Margaret met shortly after she moved to Sterling and as one could imagine they had an instant connection and after a few months of dating, were married in 1957 and began their epic new adventure. They took over the homestead farm in 1957 and began a family ultimately growing to six children.

Melvin and Margaret enjoyed 44 years of marriage before Margaret sadly passed away at the age of 66 from breast cancer. Melvin, now 84, continues to enjoy the loyalty and care of his children and is always up for the next card game.

Melvin and Margaret were very community minded and involved in the Crook community from every facet. Their involvement spanned from the Fire Department, Soil Conservation District, Historical Society, Dance Clubs, Women’s Club of Crook, the Crook and Colorado Young Farmers Educational Association and other groups. Times were tough and money was scarce so Melvin and Margaret worked hard to provide opportunities for their children. One important skill they instilled was the ability to work hard to achieve their goals.

Northeastern Junior College played a valuable role in the success of the Kokes Family. At the time, Northeastern was a District College and offered reduced tuition to county residents because residents paid a special mill levy tax to the college. The Community and Adult Education program offered a special opportunity for community members such as Melvin and Margaret to enhance their operations and lifestyle through programs such as Young Farmers, Emergency Medical Response training along with other community service programs.

Because of the reduced tuition, the six Kokes children (and most of their spouses) started their education at Northeastern. The Northeastern experience offered the Kokes children an opportunity to meet new people, learn from some of the best educators and grow in preparation for the new lives they were about to embark on.

Bruce and Kathy (Mathewson) farm and ranch on the family farm North of Crook and supplement their income through other agriculture related enterprises. Kathy recently retired from Cabela’s in Sidney, Nebraska. Bruce holds a number of certificates from Northeastern in Ranch Management, Emergency Medical Tech, First Responders, Fire Science and Young Famers. He is Past President of Colorado Young Farmers Educational Association and is a 45 year member of the local Young Farmers Educational Association.  Kathy holds certificates in Early Childhood Education as well as other training through community education. Their children: Levi (Emily), Brett (Jenna) and Brittany (Travis Cook) all graduated Northeastern and are thriving with young growing families of their own.

Teresa and Don Stieb: Teresa graduated from Northeastern with two degrees Secretarial Science and Nursing. In between degrees she also worked in the Student Health Center. Don graduated from Northeastern in Production Agriculture. Don is the co-owner of Stieb Brothers Farms and Feedlot and Teresa is a nurse with UC Health in Sterling. Both Don and Teresa are well respected in the Iliff community holding positions in the church and various agriculture, community, and irrigation boards. Their four daughters are all Northeastern graduates and are as follows: Jackie (Chris Corbett), Amanda (Tony Cristello), Samantha (Sam Roberts), and Ann (Tyler Sieg).

Mark and Peggy (Saylor): Mark graduated from Northeastern with an Associate degree majoring in Agriculture Education and graduated from CSU. Peggy graduated from Northeastern with an Associate degree majoring in Elementary Education, graduated from UNC and received a Master’s degree while teaching. Both are retired from full careers in teaching. Mark was a high school Agriculture instructor for 10 years then taught at CSU for two years, training Agriculture Instructors while getting his Master’s degree in Instructional Leadership before returning to Northeastern as an Agriculture Instructor for eight years. He finished his professional career as General Manager of Morgan County Quality Water District and has recently returned to Northeastern to serve as President of the NJC Alumni Association Board of Directors. Peggy retired after 30 years of service in Elementary Education at Fort Morgan School District as a fifth-sixth grade teacher at Baker Central. Their three sons are Cameron, Conor (NJC) and Spencer.

Kent and Julie (Manuello), ranch and farm on the family farm in Crook. Kent has been actively ranching and farming since graduating from Caliche High School and has continued his education through the Community and Adult Education program at Northeastern. He is a graduate of the Farm Business Management program and has numerous certificates through Fire Science, and Emergency Medical Training and is an active member of the Crook Fire Department, Northeast Colorado Cattlemen’s Association Past President and the United Church of Crook. Julie (Manuello) Kokes graduated from Northeastern and with an Associate Degree Elementary Education and advanced through her Master’s degree later in her career. She is actively teaching in the RE-1 Valley School District as an instructional leader and third grade teacher at Campbell elementary. Their children: Kirk, Taylor (Jordan), and Joshua are all Northeastern graduates or current students.

Marvin and Marianne (Donahue) Kokes. Marvin graduated from Northeastern in 1985 with an Associate Degree in Business and Marketing. He graduated from CSU and worked for Farm Credit Services for 3 years before moving to Denver to become Senior Vice President of the National Cattlemen and Beef Association in charge of Marketing and Corporate Relations. Marvin has had numerous leadership positions throughout his career most notably National President of the National Agriculture Marketing Association. Marvin travels over 200 days per year throughout the United States and abroad promoting the Beef Industry and securing corporate sponsorship for the betterment of the Beef Industry. Marianne continues to teach elementary in the Douglas County Schools in Highlands Ranch.  Their children: Hannah, Brandon and Olivia.

Susan and Todd Sigmon: Susan and Todd are both graduates of Northeastern and both earned their Bachelor’s Degrees from the University of Wyoming. Susan is the owner/ manager of a 250 head cow/calf operation in Fleming, Colorado. Todd is the Vice President in charge of Marketing and Procurement for Dinklage USA Feed Yards. Susan has a teaching degree in Mathematics and has been involved in the Fleming School District as a substitute teacher and a bus driver while managing the family cattle operation. Todd who has a degree in Animal Science and Nutrition travels extensively through the region monitoring the Dinklage Feed Yards operations. Susan and Todd are active members of the National Cattle and Beef Association and both serve their industry and community on various boards and committees. Their children are all in college or have attended Northeastern. They are:  Jessica, Brooke and Cole.

Interesting Statistics: Melvin, Margaret and their 6 children and 5 of their spouses all graduated or received training from Northeastern. Of the 19 grandchildren, 14 attended or are attending Northeastern. The Kokes family has been served well through Northeastern’s inclusive mission and positive outreach to the rural communities in Northeastern Colorado.

One should note that this family is comprised of very intense and highly motivated individuals that were given the unique tools of personal drive by Melvin and Margaret Kokes. Their success lives on through the next generation and everyone in the Kokes family will agree that Northeastern provided them with outstanding leadership and educational opportunities.

The Pride in Association Award was established in 2002 by the Northeastern Junior College Alumni Association. It is bestowed upon a family or individual who has provided support, dedication and loyalty to the college over the years. It is presented by a representative from the Alumni Association’s Board of Directors each year at the spring commencement ceremony.