NJC baseball adds ’10th Man’ to its roster for a day, sweeps double-header 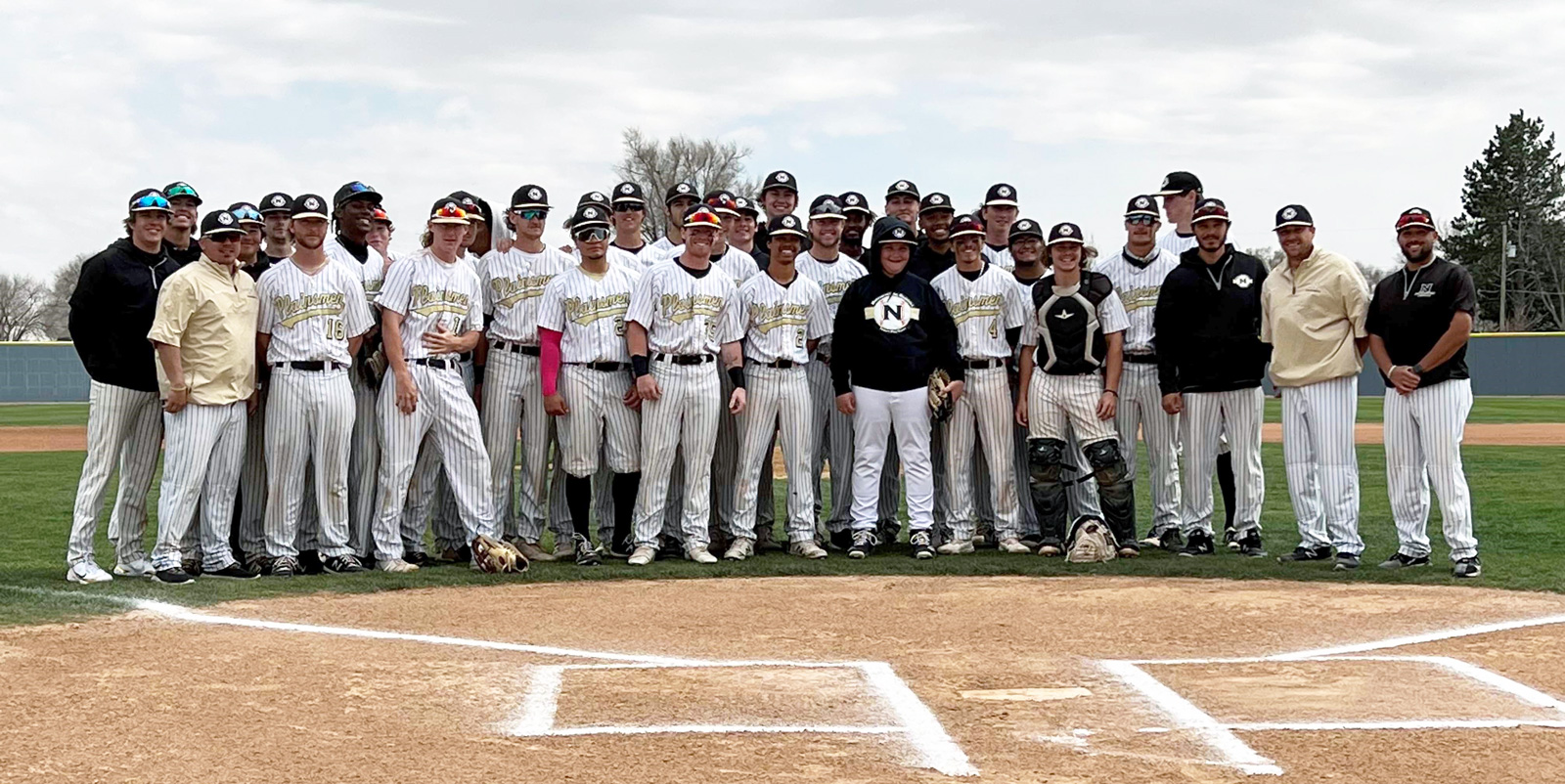 The Northeastern Junior College Plainsmen baseball squad had a unique “tenth man” for a game recently.

Twelve-year-old Jacoby Kramp of Denver traveled with his family to Sterling to join the Plainsmen for batting practice and a double-header against Southeast Community College of Beatrice, Neb.

No, NJC’s recruiting efforts don’t extend into middle school yet, although Coach Andrew Kachel may want to keep Jacoby in mind; the Plainsmen swept the double-header 9-2 and 10-8 while Jacoby was in the dugout.

Rather, it was a dream-come-true trip for one tough kid who’s fighting brain cancer. And the story of how he ended up throwing out the ceremonial first pitch decked out in regulation NJC baseball togs is a story about what guys will do just because they’re guys.

The pre-teen’s trip to Sterling came about because Kachel is good friends with Mike Koons of Parker, Colo. Koons runs the Denver area Gameday Youth Baseball program, and has on his volunteer coaching staff Trey Reineke, an alum of NJC, and Jose Diaz, who travels to Sterling occasionally to help coach the Plainsmen.

Because of his connections with Koons et al, Kachel had a speaking engagement at Gameday back in December, where he spoke on how college recruiting works at the NJCAA and NCAA levels in the post-COVID world.

Several days later, while perusing the Gameday social media page, he saw a post about Jacoby and his diagnosis. Jacoby, it turns out, plays for Gameday Blaze, and his “baseball family,” as his father puts it, stopped by the Kramp home to visit their teammate and offer their support.

When Kachel saw the post, as guys will do, he immediately called Koons to ask how he and the Plainsmen could help.

“Since we had coaches in our program that worked for their program, I emphasized that we are all an extension of one family, and that if Gameday has someone going through a battle with cancer, then Northeastern Junior College baseball does as well,” Kachel said.

Koons put Kachel in touch with Scott Kramp, Jacoby’s father, who liked the coach’s idea of having Jacoby spend the day with the Plainsmen. Kachel then went to NJC Athletic Director Marci Henry, who wrote a letter to the NJCAA, who granted Kachel permission to add Jacoby to the roster for one day.

And so, on a cloudy, blustery day last week, Jacoby Kramp (#34) spent the day with the NJC baseball team. He did it in full Plainsmen regalia, including hat and warmup jacket, and scored an armful of swag from the college’s athletic teams. Southeast CC chipped in some Storm memorabilia as well.

Jacoby took his turn during batting practice before the first game and smacked a couple of Texas leaguers, securing his credentials as one of the guys. He then threw out the ceremonial first pitch and joined both teams on the mound for a couple of group photos before spending the rest of the day with the Plainsmen in the dugout.

“We appreciate (Kachel’s) thoughtfulness and generosity in making this a special day for Jacoby,” Scott wrote. “Thanks also to Southeastern Community College and Coach Dion Parks who also reached out to us when he heard about today.  Both programs are class acts and treated Jacoby and our family very well today.”

As so often happens in these cases, the Plainsmen received as much as they gave from having Jacoby with them. Kachel said afterward that the lad was an inspiration to his team.

“We are beyond fortunate that we could help create a special day for Jacoby, but our program is just as equally touched and blessed to have had Jacoby spend the day with us,” he said. “Jacoby is only 12, but his courage, strength, and unbelievably upbeat personality going through what he has faced, is something that serves as inspiration for our 18- to 20-year-old young men, and our program as a whole.”

Because, y’know, that’s what guys do.