Faculty and fellow students commend student leaders for their efforts 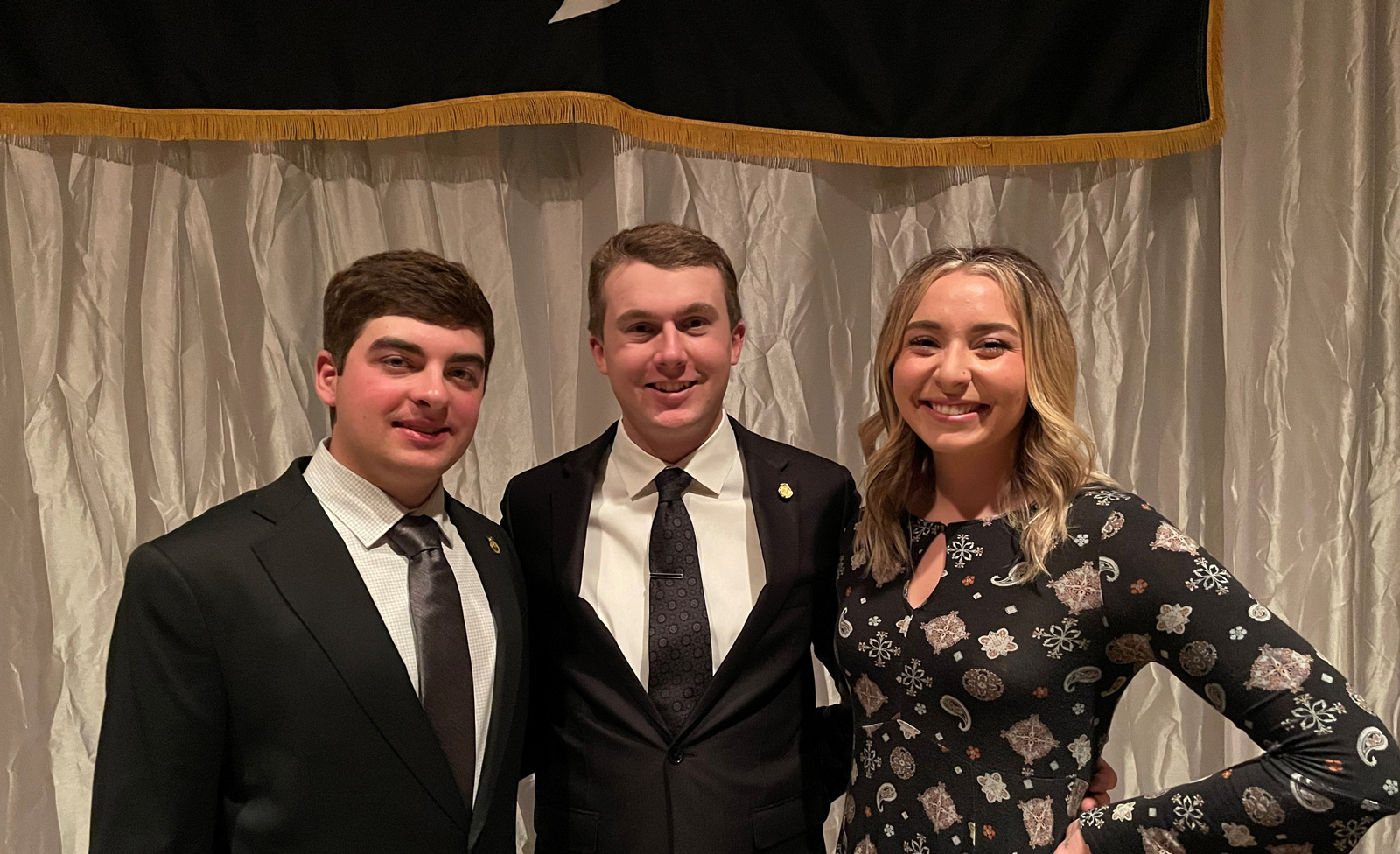 Recently, there has been a noticeable change in the atmosphere on the Northeastern Junior College campus and part of that change can be credited to the efforts of a strong student leadership team.

Associated Student Government officers Brandon Melnikoff from Collbran, president; Kathleen (Kat) Marty from Strasburg, first vice president; and Jayce Maker, from Sterling, second vice president, have strived this school year to have a strong presence both on campus and in the community.

”(Brandon) and the ASG team have initiated several new campus activities and he does a wonderful job getting students to participate – a difficult task normally, but especially with our post-covid population. He attends events all over campus, from oyster fries to theatre productions to athletic events,” said Celeste Delgado-Pelton in a nomination for Melnikoff for an award given through the Colorado Community College System.

Activities have ranged from everything from a hypnotist and glow in the dark volleyball to a Family Feud event pitting staff against students that was so successful it was held twice this school year.

They’ve also encouraged participation on campus in other ways, including promoting the recent study body election as a way for students to practice their civic duty. The ASG officers created a Blue Book, similar to the one provided for state elections, with information about ballot initiatives to increase student fees and rename ASG to Student Government Association, as well as candidate bios and also made sure there were plenty of opportunities for students to participate, with both online and in-person voting, as well as pop-up voting booths in the cafeteria. As a result, voter turnout 275 students, up almost 100 students over the previous year.

While both ballot initiatives were unable to get the two-thirds majority needed to pass, they did receive over 50% of the votes and it was a good learning experience for the students.

The ASG team’s efforts have gone far beyond running elections and providing activities for students though. They’ve also found simple ways to show kindness to their fellow classmates, for example when a student with an intellectual disability was acting in the school play, Melnikoff was there to show support and presented flowers to her afterwards.

“All three of them are always looking for ways to be involved in campus and help students out that are in need,” said freshman Abbey Scholz.

In addition to serving as ASG officers, all three are also actively involved in the Ag Department as members of the NJC Collegiate Farm Bureau and Aggies Club. Marty is also a member of the Math and Science Club and chair to the Student Senate and Maker is active in Round Pen, a Christian group for college students, and is always inviting people to come join them.

Melnikoff was also “thrust into a really adult position” when he was asked to served on the presidential search committee, which require a lot of time and effort. Mike Anderson, chair of the Ag Department, commended Melnikoff for the way he handed that role at and Advisory Council meeting earlier this year.

“It would have been very easy in that process to get intimidated, but he was asked to give his input, he was asked to be a part of that and the community college system and the chancellor and the HR director at the state level listened to that committee and I just want to say thank you, because I know how much time that required and we really appreciate Brandon all of your leadership, but especially in that area,” Anderson said to Melnikoff.

In her award nomination, Delgado-Pelton said that Melnikoff offered valuable insight, asked strong questions and took extensive time to spend with each finalist. He surveyed the student body for feedback and prepared a letter for CCCS Chancellor Joe Garcia to help support him with his decision to hire Mike White as the new president and after White arrived, he wrote an opinion piece for the Journal-Advocate commending White for his active presence on campus.

Delgago-Pelton also shared that when the former president tried to close down one of NJC’s most popular and historical residence halls for cost savings, Melnikoff worked with the director of housing to create a different option that would allow the hall to stay open and make more money in the process.

“Brandon is the strongest ASG President we have had at NJC in my 18 years here,” she said. “He has made me a better educator through the experience of working with him over the last year, and I am confident he will become one of our most notable alumni through his future endeavors.”

Other faculty members have commended the entire ASG officer team for their efforts as well. At a recent Advisory Council meeting Kevin Stump, president of the Faculty Senate, thanked the ASG officers, as well as their advisor Tim Stahley for their efforts to improve morale this year, saying “it’s really made a difference.”

It’s not just those on campus who are benefiting for this strong leadership team though.

Scholz shared that both Melnikoff and Stahley helped a Sterling High School FFA member, Connie Gassaway, polish up her prepared public speaking speech for the district FFA competition and she is now headed to state and they also helped another Sterling FFA member with their resume for the employment skills contest. Melnikoff, a former FFA state officer, has even provided assistance to several other students across the state to help them prepare for the Colorado FFA Convention, “just making sure they’re as prepared as they can be, mostly for employment skills,” Scholz said.

Melnikoff and Maker also provided leadership advice and lessons in parliamentary procedure for 4-H and FFA members at a “Being the Leader You Wish to Be” conference at NJC in February, and both Maker and Marty were selected with Scholz to serve on the Premier Farm Credit Student Board of Directors and helped put together new enterprise budges for the business.

“So, not only are the busy students and busy with ASG, but they also take time to help out with local businesses too, which I think is cool,” Scholz said.

Their involvement in the community is being seen by others too. At an Advisory Council meeting earlier this year, Wade Tyrell commented about NJC’s float in the Parade of Lights.

“I don’t know if it is because of your leadership Brandon or what Tim brings to it, but as a member of the Chamber of Commerce, NJC had an amazing turnout of your student body and you were second or third float and you really set the stage, I think, for that whole parade,” he said, telling Melnikoff “we had more comments, positive comments about the attitude and the involvement of students body and I continue to hear it months later.”

He also mentioned a discussion that one of the Chamber’s subcommittee’s had about the value of the student body on the area’s small retail businesses.

“Our smaller retailers are noticing that student participation in their businesses is increasing,” Tyrell said, adding that they would be happy to hear any ideas that Melnikoff and his fellow officers might have for ways to draw students into businesses.

Melnikoff was quick to let Tyrell know his team would be open to meeting with the Chamber to talk about that and in response to comments that Tyrell made about seeing a new spirit come to life on the NJC campus, Melnikoff said he’s seen it too.

“One of the things I’ve noticed and it’s just, I think been a shift from my two years here, last year to this year, the student body just seems really close and connected and really active and they want to go out and visit businesses and just be involved in the community. I saw that last year of course, but I’ve seen it a lot more this year and I’m really proud of that,” he told the council.

At another Advisory Council meeting earlier this month, Melnikoff thanked his fellow officers for their support and spoke about how he believes they were able to restore the ASG to its “glory days.”

“I think that we’ve really done that this past year. How have we done that? I think we’ve really established a presence on campus, we’ve shown up everywhere, we’ve gone around and talked to faculty and just kind of rekindled the relationship with the faculty and the staff, and then we’ve restored that relationship with the student body and I think we’ve also had a phenomenal presence in the community,” he said. “I’ve been really proud of our work this year and really proud of our ASG team, but also like to thank all of the faculty and staff, your support this year has been phenomenal, we couldn’t have done any of this without you.”