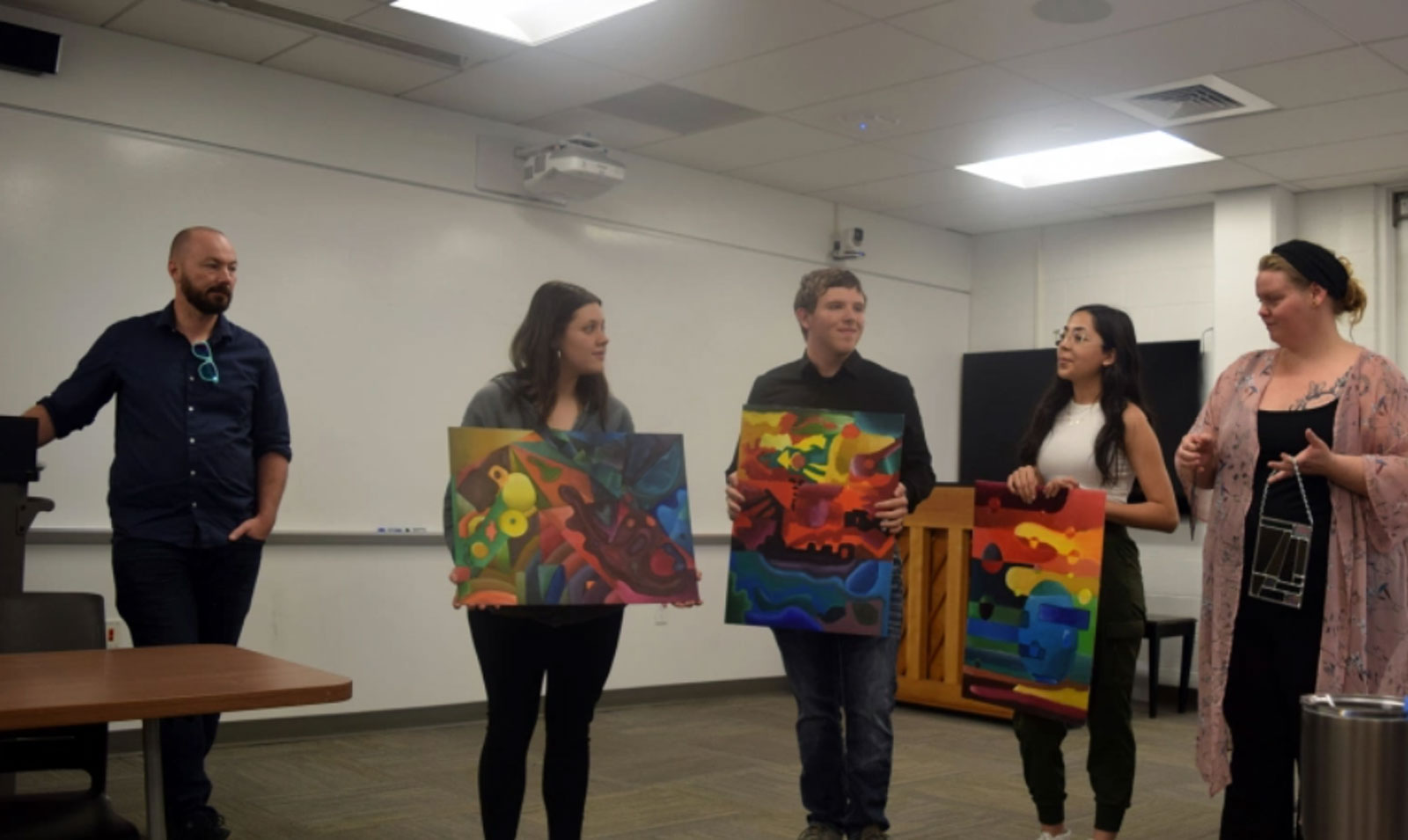 Despite facing some challenges when the COVID-19 pandemic hit, visual arts is flourishing again on the Northeastern Junior College campus.

Starting Monday, the Pete Youngers Gallery inside E.S. French Hall will feature the annual NJC Student Art Show, which will run through May 6 with a closing reception Thursday, May 5, from 5 to 7 p.m. Several students with pieces featured in the show showed off their painting and stained glass creations at an NJC Advisory Council meeting Thursday.

“This was a fun semester for me, coming from trying to teach art online, not the best platform, but then slowly kind of recovering from that and then for the first time in several years my painting class has been able to run, because we filled it full of students. So, we had a really lively semester with lots of people kind of using both of art rooms and moving in and out and using it as a workspace,” said professor Will Ross.

The students showed the first project they made for his painting class, which for some of them was their first time ever working with paint. Ross said the goal of the project was to give students a lot of experience without having any trepidation about putting marks on the page.

He started by having them create an imaginative design using line and shape and then transition towards applying color, really flat applications of color. Once that was all painted then they had to do it again to cover the surface one more time while starting to give the piece some dimensional volumetric application of paint, “where they’re changing the color of the paint but then also the lightness and darkness, to give it a 3D effect,” Ross said.

The students spoke about seeing different things in their painting as they progressed and really trying to enhance those images. They also noticed how just simply flipping the painting from a vertical to horizontal position could change what they saw.

“It just showed how many perspectives there are in abstract painting, and it taught me that I shouldn’t really judge it how I first paint it, maybe try spinning it around a couple of times and see how it turns out,” Clinton Eckenrod said.

The show will also feature stain glass pieces, which is a little bit more difficult to create then you might think. Kaylee Soule spoke about first creating a lead stained glass piece and then using Louis Comfort Tiffany’s copper foil technique, “which is a lot lighter, a lot more malleable and easier to work with.”

“It’s very soothing, who needs therapy when you have art,” she said.

Celeste Delagdo-Pelton, chair of the liberal arts department, shared that they fought really hard to be able to keep performing and visual arts on campus when COVID-19 restrictions started to be implemented and to allow students to create in whatever medium it is that they’re passionate about. That was very valuable for the students.

“A lot of students over the last two years shared that, that was really what got them through all of the difficulties and we’ve actually had a really nice explosion of community students that have started taking painting and stained glass and ceramics and are really kind of finding the mental and physical benefits of participating in the arts,” she said.

In addition to the art show, you can also enjoy the talents of Northeastern’s performing arts students at the Spring Ensemble Concert set for Saturday, May 7 at 7 p.m. in the Dorothy Coresberg Theatre.

Delgado-Pelton also spoke about The Partnership for Rural Educator Preparation (T-Prep) program. Beginning in the fall of 2022, this partnership between University of Colorado Denver and NJC, will allow students to start taking classes at NJC to earn an associate’s degree and then they can complete the rest of their classes as a CU Denver student in face-to-face classes taught by CU Denver faculty on NJC’s campus in Sterling or online. Students can earn bachelor’s degrees in early childhood education, elementary education and special education.

The program is initiated through a grant through CU Denver, meaning students pay NJC tuition the first two years, but then they pay discounted tuition for their second two years,” so students doing this will be able to complete a bachelor’s degree roughly, depending on tuition hikes, for around $35,000, which is kind of unheard of.” On top of that, there is also scholarship money available.

Delago-Pelton announced that Jenny Smock has been hired as residency coordinator, paid for by CU Denver. She will be in charge of making connections for students as they go out and do observations working with teachers in classrooms and she will also do a lot of the coordinating of the classes.

“We hoping that we’ll get a lot of traditional age students with this program, we already have some pretty significant interest from concurrent enrollment students, but this program is also kind of really geared towards adult learners,” she said. “We have a lot of students that have been working as paraprofessionals in the schools, because they want to be in education, they got that first two years done, but they have life or families or mortgages and they just can’t pick up and move to the Front Range, so that is a tremendous opportunity for us to be able to offer to students to be involved in this program.”

While they hoped to have five to eight students start in the program this fall, interest is so great they already have 38 students in the queue. Some have just made an initial inquiry, but others are already fully enrolled have scholarships awarded.

“It’s just tremendous and it makes me a little emotional how much this is going to do for this area. The teacher shortage is just terrible; we already have principals that are saying how quickly can we hire your graduates?” Delgado-Pelton said.

NJC President Mike White spoke about some of the things he’s been thinking about and wanting to work on, including enrollment and looking at NJC’s sustainability and other offerings they might provide for students. He mentioned that Colorado State University has contacted him about doing a program similar to T-PREP, maybe for accounting.

White also shared the college is making some investments through grants to get the precision ag program moving forward. While the first certificates in the program are being awarded this year, the program’s start was hampered by COVID-19.

Additionally, he mentioned some opportunity in Career and Technical Education, particularly with the U.S. Air Force’s new intercontinental ballistic system that is expected to break ground in 2026.

“We think they’re going to need some skilled labor, so we are talking and attending some town halls to see if maybe an electricians program or something that if we start soon would provide some skilled labor for them in the future,” White said.

Steve Smith, vice president of student services, spoke about commencement plans. There will be two ceremonies on May 13, with no restrictions this year. Agriculture, emergency medical services, fire science, health, math and science, and nursing students will be recognized at the 10 a.m. ceremony and applied technology auto, wind, diesel and welding, business /sports management, cosmetology and liberal arts students will be honored at the 2 p.m. ceremony.

Rachelle Davis, developmental math professor, spoke about the NJC Math and Science Contest which took place March 29 and 30. Approximately 500 high school students picked by their schools came to NJC to compete in various math and science tests. The annual event is a fundraiser for NJC’s Math and Science Club, this year they were able to raise $1,500.

In other business, White announced the resignation of council member Sergio Sanchez and said they are looking for someone from Yuma to replace him and Faculty Senate President Kevin Stump announced that they have awarded their yearly scholarship to Macie Smock, a Caliche High School graduate