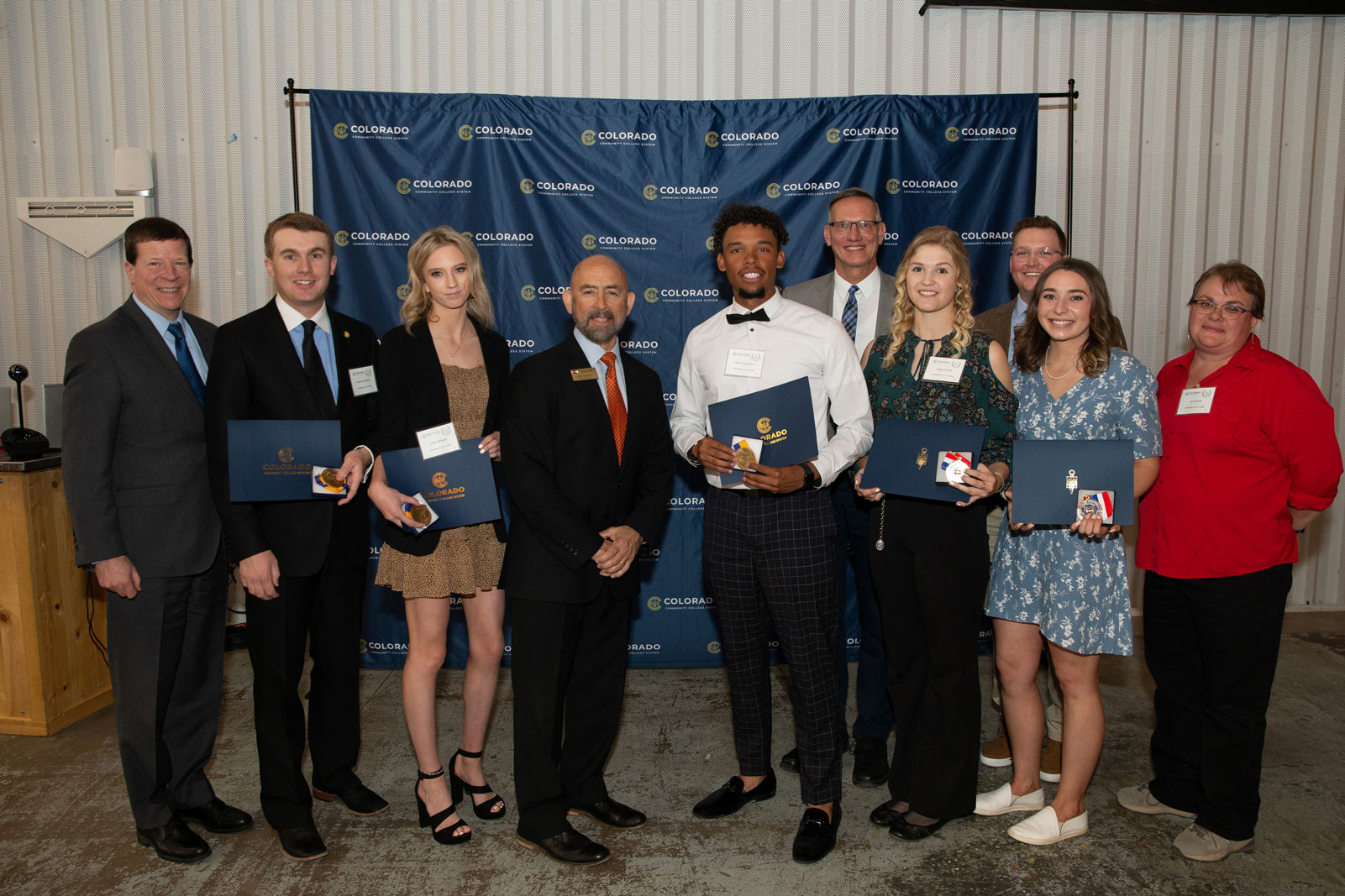 The Rising Star Award is bestowed upon community college students who exhibit a high level of leadership and involvement in student activities, along with maintaining a 3.0 grade point average. This year’s award recipients are Brandon Lee Melnikoff and Noelle Meagher.

Melnikoff is a Colorado native from the west slope town of Collbran. He is a double major at Northeastern studying Agriculture Education and Agriculture Business. His involvement on campus includes serving as Associated Student Government President and a member of Collegiate Farm Bureau, Young Farmers and Ranchers, and the NJC Aggies Club.

Melnikoff is interested in politics, history, agriculture (specifically cows and horses), working outside – especially in the mountains, and basketball. His future plans include transferring and graduating from West Texas A&M University with an Agriculture Education degree. He would then like to come back to Colorado to teach, and hopefully get the opportunity to run for a political office of some fashion.

“Brandon is a phenomenal student leader on Northeastern’s campus. He continually raises the bar for student leadership. Brandon has written open letters to the editor of our local paper to discuss issues and commend others for their accomplishments, often writing well beyond his age,” said his award nominator Celeste Delgado-Pelton.

Melnikoff enjoys binge watching his favorite TV shows and movies including; The Office, Yellowstone, and Lonesome Dove. He also enjoys attending local and state FFA events to show his support for the organization, Melnikoff was a former Colorado FFA State officer. He likes road trips, exploring the mountains, and refining his role as a connoisseur of mac and cheese.

Meagher grew up in Eaton and is studying Communications at Northeastern. She is a very successful two-sport athlete, competing on the volleyball Team and golf Team, and is also a resident advisor on campus and works for the athletic department taking all of the athletic team photos, media day pictures, game/event pictures and running social media accounts. She is also the Student Athlete Advisory Committee President on campus and will be in charge of running and facilitating the end of the Year Petey’s Event Ceremony.

Meagher has her own Photography business, which includes taking pictures for a salon she works at, couples pictures, athletic pictures and more. She also coaches a club volleyball team in Northern Colorado.

Her goals for the future are to establish herself as a photographer and continue to grow her business. She would like to focus on sports photography, but also continue to shoot fashion, weddings, seniors, and other projects.

“Noelle is a person who will go out of her way to make sure others are taken care of. She puts others before herself and is truly one of a kind,” said her award nominator.

Phi Theta Kappa Scholars this year are Kathleen Marty and Paige Finegan.  The All-Colorado Academic Team recognizes a select few PTK students, not only for their academic achievements, but also for their commitment to making their college and community better by giving back.

Outside of the classroom Marty participates in many clubs and boards. She currently serves as the first vice president of the Associated Student Government at Northeastern, and is also the chair to the Student Senate. Plus, she serves as the Northeastern representative to the State Student Advisory Council for the CCCS.

On campus, she is a member of NJC’s Aggies Club, Math and Science Club, and Collegiate Farm Bureau. Recently, Marty has also been elected to the Premier Farm Credit Student Board.

Her goals after graduating in May are to attend the University of Kentucky to obtain a Bachelor’s Degree in Sustainable Agriculture and Community Food Systems. When she is finished with her education, she would like to move to Washington D.C. to work as a Congressional Ag Liaison.

In her spare time Kat enjoys spending time with her family and friends. Marty spends most of her time at home on her family’s farm playing with baby goats and her Border Collie Kenai. During the summer she enjoys rock climbing, hiking, and white-water rafting.

Finegan is from Orchard, where she grew up on a farm and ranch. At Wiggins High School, she was involved in many activities such as volleyball, basketball, track and field, FFA, Honors Society, and Student Council. Outside of school, she was greatly involved in 4-H where she showed dairy, market goats, and horses.

Currently, Finegan is on the NJC Ranch Horse Team where she is the Vice President. She is also working towards her Equine Science degree. After her journey with Northeastern, Finegan plans to transfer to West Texas A&M University where she will pursue a bachelor’s degree in Equine Industry and Business. Her main goal is to become an equine physical therapist and rehabilitator.

In her spare time, she likes to ride her horses, Ike and Riata, and working on the ranch she grew up on dealing with the cattle operation. Finegan also likes to work with her local 4-H to be a volunteer instructor for the Horse Program in Brush, Colo.

The Inclusive Excellence Award recognizes students who have demonstrated a strong commitment to diversity, equity and inclusion on their campus. This year’s award recipient is Stevins (Steve) Spurgeon.

Spurgeon comes to Northeastern from Bellevue, Neb. He is a left-handed pitcher for the Northeastern baseball team, a resident advisor, an admissions ambassador and is studying Elementary Education. His interests include watching sports and eating food.

He is involved in the Associated Student Government senate and spends a lot of time on the baseball diamond. His future plans include playing baseball at Jackson State University and continuing his education to receive his bachelor’s degree, and eventually his masters and potentially his doctorate. His long-term career goals are to become an elementary teacher, specifically third grade. He could also see himself becoming a principal or leader within his respective school district.

Spurgeon also enjoys spending time with his friends and family. While at home, he participates in youth group and helps with the church kids programming.

“Steve is one of the most well-known students on campus for many reasons. Primarily, without knowing, Steve has built and developed a culture of positivity and acceptance. His happy, positive attitude is contagious. Steve has broken down silos among student groups, has established connections amongst peers, and instilled a sense of happiness and excitement among faculty and staff. Steve has single-handedly improved morale across campus just by simply being himself,” said his award nominator.